So I was messing around with networking in UT99/emscripten, just to see if I could get it to work.

Unreal uses UDP packets, usually on port 7777, between a client and server. All the players talk to a server, which updates all the other players with relavant information. It's not peer-to-peer. If you don't have a dedicated server, one of the players will start a "listen server," which is to say they'll be both a server for everyone else, and a client of that server.

Emscripten, believe it or not, will compile and run C code that creates a datagram (UDP) socket, but it doesn't work quite like you'd expect. For one thing, there isn't any UDP support available to Javascript in web browsers, so by default Emscripten will wire this up to a WebSocket.

UDP, for those that don't know, sends unreliable packets. That is, you give it some bytes to send and a destination, and that packet of data blows off in the wind. All the packets you send are self-contained (it's not a stream of bytes like a TCP connection) and any given packet may or may not arrive, or a series of packets may arrive in a different order than you sent them. The sender does not know the final result in any case. This is why most things opt for a reliable transmission system like TCP, where everything arrives in order, lost packets are retransmitted transparently on your behalf, etc. The downside of TCP is that if something gets lost, your app gets nothing until the system sorts it out, resends, and gets you the next thing that was supposed to arrive. UDP can't make networks transmit packets better, but has the opportunity to avoid TCP's stalls, for programs that can just carry on without the dropped data. Not every program has that luxury (your web browser can't go on if pieces of a page's HTML just sort of didn't show up, for example), and the ones that do need significantly more engineering to solve the problem, but the problem is at least solvable.

There are other tradeoffs, of course. There are also concerns about firewalls and proxies, for example, but I won't bore you too much.

If you want to hear about a really well-done system built on top of UDP, Quake 3 Arena is open source and well-documented. You should definitely read Fabien Sanglard's explanation of Q3A's networking model for the details and check out ioquake3 for the source code.

Unreal also uses UDP, and its own state replication system.

WebSockets are almost nothing like UDP; they are a reliable stream, built on top of TCP, and they even start out looking like HTTP/1.1 requests! Unlike HTTP, though, once the initial headers are sent, it's a bidirectional protocol that sends data in frames, so if you're willing to treat all the potential stalls that reliable TCP can suffer from as lost packets, you can at least build something that smells like UDP on top of it.

(Details on WebSocket protocol are here.)

The actual C++ changes to Unreal were pretty small: the networking code was already compiled in (and failing, of course), so I just had to make what was there work.

A handful of things got #ifdef'd: you can't set SO_BROADCAST on a datagram socket in Emscripten (there is no such thing as a broadcast WebSocket, of course, so this would always fail), but this was only necessary for LAN discovery, I think, so I could just turn it off. Also, you can't bind() a socket to a specific port (which Unreal needs to do for servers, but erroneously does for clients, too). There is TCP code in there for a few things, like querying the Master Server, and that's still broken for now. My goal was to be able to connect directly to a server ("open xxx.xxx.xxx.xxx:7777" in the game's console), so I haven't messed with that.

After that, the real plan came into play:

When you try to send on a UDP socket in Emscripten, it'll do one of two things:

In effect, my server becomes a UDP proxy for the web browser.

UDP has one more interesting quirk: unlike TCP, which makes a single connection, a UDP socket can send to any address/port, and any address/port can send data to it. I intended to reuse this for the master server browser, which wants to "ping" dozens of servers on a single UDP socket, so this added a complication: one WebSocket connection needs to send details about where packets are going and where they came back from. If I wanted to just talk to a single server, I could have probably just passed that info as a URL parameter and had no other C++ changes. It's something to consider for your own work.

Since I wanted this to work with any address/port, I needed to get that information in each WebSocket frame sent. So you might have an #ifdef like this for your sendto() call...

The gist is that everything sent over the WebSocket has the address and port where the packet is to be sent (or where it came from) appended.

Now that's good to go, time to figure out the server side.

First, we know if you can download the game, you can talk to the same server over port 443 (https://) already, and I didn't want to set up a second IP address just for this silly little experiment, so I wanted to see if I could get the existing Apache install to cooperate with me. Turns out, I could. Just make sure mod_proxy_wstunnel is enabled, and Apache will accept WebSocket connections and forward them to an actual WebSockets server process. Added benefit: Apache will speak SSL for you (for wss:// connections), so the thing it's going to proxy to, on localhost, just has to look at plaintext and not mess around with certificates and such.

"SSLProxyEngine on" is necessary to have Apache deal with SSL on your behalf. "ProxyPass" says "when someone connects to "wss://icculus.org/mysocket/", proxy it to "ws://localhost:8348/" on the Apache server. Note that both ws:// and wss:// connections are accepted by Apache and will do the right thing here in either case.

Now we just need something to listen on localhost:8348.

This is what I came up with. I googled for something about WebSockets and UDP, and came across Dimitris Fousteris's post about proxying UDP packets, in a similar way to what I was looking for. He used node.js, which I wasn't super-comfortable with, but having looked at libwebsockets, I decided the lower resource use I could achieve in C wasn't worth the time to write it, especially as a test case. This code is a little different, but it was originally based on Dimitris's code.

Pretty straightforward: make sure the connection is valid, make a UDP socket for it, when something comes from the client, send it out into the world as a UDP packet, and when a UDP packet comes in from the world, send it to the client. Tap dance a little to add and remove the IP address/port info from the packets as they pass through. On client disconnect, close the UDP socket.

It's worth noting that this, as it stands, totally works as an open relay for UDP packets. That's bad. It does reject connections from sockets that don't claim icculus.org as an origin, but that's easy to fake. You will want to lock this down more (maybe some unique identifier on the URL or a password for users or something). This isn't actually running on my server at the moment, so I'm not too concerned about locking it down. :)

(Also, this Node.js script is listening on all ports; the Internet can talk to it directly. You'll definitely want to limit it to localhost.)

To get this working, just put that file in a directory, run "npm install ws" to get the WebSocket support, and "node myproxy.js" to run it.

I was able to talk to a native Unreal Tournament server with a reasonable ping. Granted, UT99 had to work with 28.8k dialup modems, so is this the recommended way to build modern games? Probably not.

In a perfect world (and when you can control what your game servers do), it could make sense to allow the server to talk over UDP and something else, like WebSockets or WebRTC, and other than some protocol-specific processing, just treat all the clients as otherwise-equal. Or just have them all use WebSockets or WebRTC by default, whether they are actually running in a web browser or not.

Note that WebRTC is probably the more "correct" way to have implemented this, as it can do unreliable packets, unlike WebSockets, but that will also require a proxy in any case, but also had concerns like firewalls that I didn't want to deal with...and Emscripten was talking to WebSockets for the existing BSD Sockets code, so that's what I went with.

Anyhow, just like the rest of the UT99/emscripten project, it was just for fun, and I don't plan to ship it to the general public anyhow. As a proof of concept, though, it was a definite success. 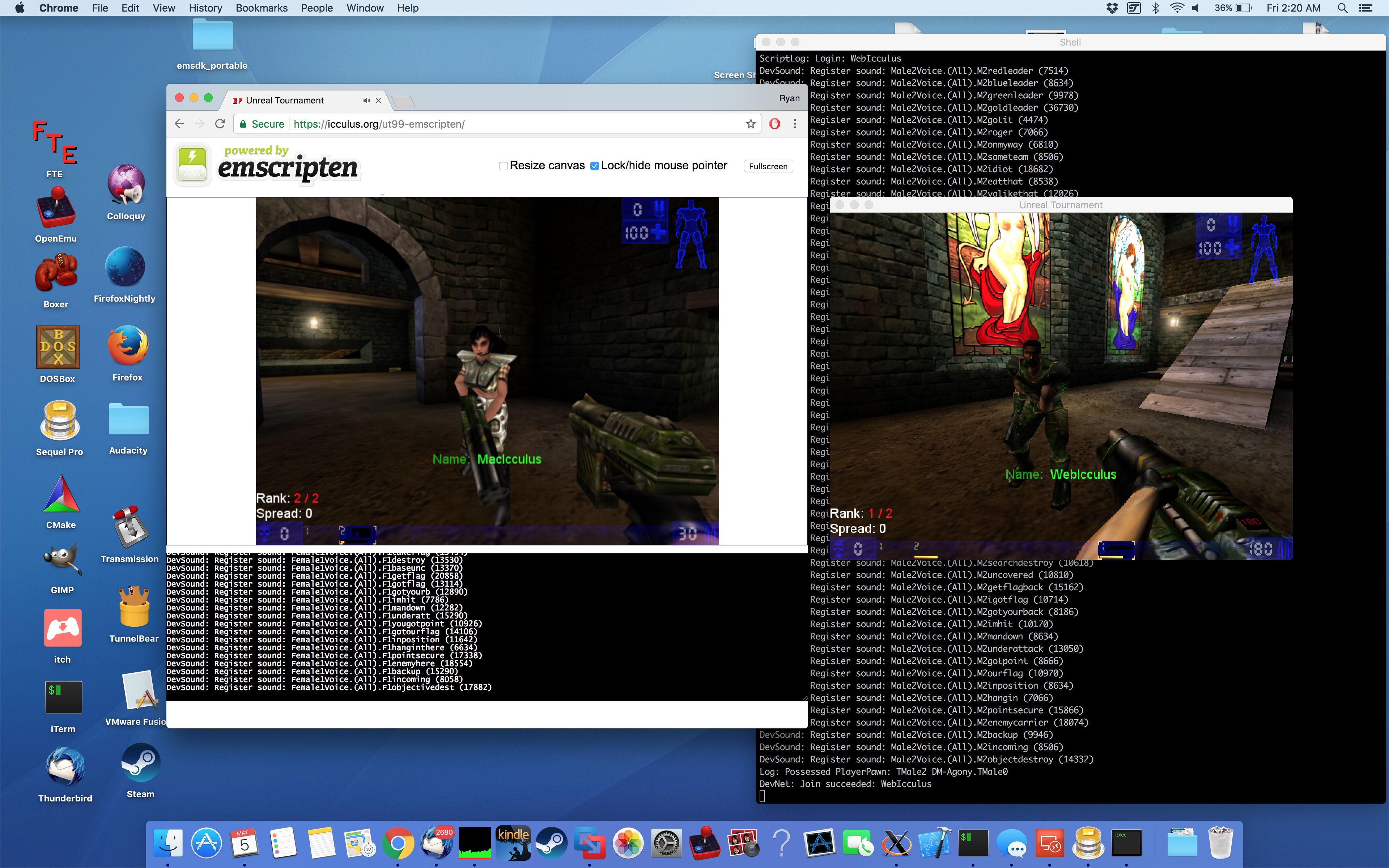