Lugaru:
Hey, that didn't take long at all.
http://icculus.org/~icculus/dotplan/lugaru_linux_firstrun.jpg
No more beta test applications, please...I got so many that I can't even
reply to them all (but thank you for sending them)!


ArmyOps:
Mac version just went out to the MacNinjas for beta testing.


Postal 1:
Running With Scissors, myself, and the MacNinjas spent some time moving
the original Postal to MacOS X. If you want it, the complete game is on
the MacWorld "Total Tiger" disc, which hits newstands today, July 26th.
Make sure you get the right magazine, since this is a special edition of
MacWorld and not the usual issue.

You can buy it online here.

This is currently the only place you can get a real MacOS X version of
Postal 1, and it's the full single-player game, not a demo, so don't miss it!


Postal 2:
If you bought the "Meal Deal #3: Minority Combo" disc from gopostal.com, it
has installers for Mac, Linux, and Windows included. This went to press
today, so those will be shipping sometime soon.

If you have a Windows-only AW disc, you can use these installers:

The installers will patch your Postal 2 install to 1409.1 if needed.


Unreal Tournament 2004:
I wedged in a hack for the license plate. There's some depth test mojo
going on that I can't figure out, so I hacked around it.

So, here's a first shot at ut2004 for Linux with all the render-to-texture
stuff.

Some things this fixes:
- The scoreboard in DM-Morpheus3.
- Motion blur in Red Orchestra and UnWheel, etc.
- Realistic player shadows.
- The Hellbender license plate.

Some notes, first:
- This is Linux only right now; MacOS doesn't have the GL extension I want,
at least not as of 10.4.2. The second it shows up in the OS, I'll pull
the trigger there, too.
- You MUST have version 3355 installed. Earlier (and later, later) versions
WILL NOT WORK, and the GAME WILL CRASH. You have been WARNED.
- You MUST have Nvidia's latest drivers, or this WILL NOT WORK (although
it will probably work like it does now, no render targets). ATI's drivers,
or anyone else's, will probably work if they support the OpenGL extension
GL_EXT_framebuffer_object.
- You MUST set "UseRenderTargets=True" in the "[OpenGLDrv.OpenGLRenderDevice]"
section of your UT2004.ini, or it WILL NOT WORK.
- To get realistic shadows, you also have to set "bPlayerShadows=True" and
"bBlobShadow=False" in the "[UnrealGame.UnrealPawn]" section of your
User.ini...the GUI config will not let you set this in 3355 (but the next
official patch will correct this). You can also enable vehicle shadows
in User.ini.
- Realistic player shadows (or even blob shadows) won't render on terrain
on the Nvidia drivers, because of their 4 TMU limit for fixed-function
pipeline apps. There is no fix planned for this at this time. Go buy
an ATI card if it bothers you, and mail the receipt to Nvidia's
engineering department.
- The DM-Morpheus3 scoreboard renders strangely in Windows too; this is not
an OpenGL renderer bug, it matches the behaviour of the Direct3D renderer.
- Red Orchestra's motion blur now works (and, unrelated, their splash
screen got fixed, too), but the sniper scope is still broken; use the
"texture" setting and not "model" for the sniper scope in the options.
This is my bug, to be considered later.
- This was not built on the Holy Build Box. If it refuses to start up on
your machine because of a glibc conflict, etc, sorry. Wait for an
official patch.
- This was built with all my gcc4 mangling from MacOS/x86, and all my Win64
changes...there is a LOT of code changed over 3355, so if it crashes, too
bad, wait for an official patch.
- This is x86 only. amd64 will not be forthcoming until, you guessed it,
an official patch. If you write me asking for an amd64 build, I will
delete it without replying.


Other stuff:
Gary Briggs saw my rambling about fast prototyping, and noted a
frightening similarity to the prepackaged Torque2D example program: 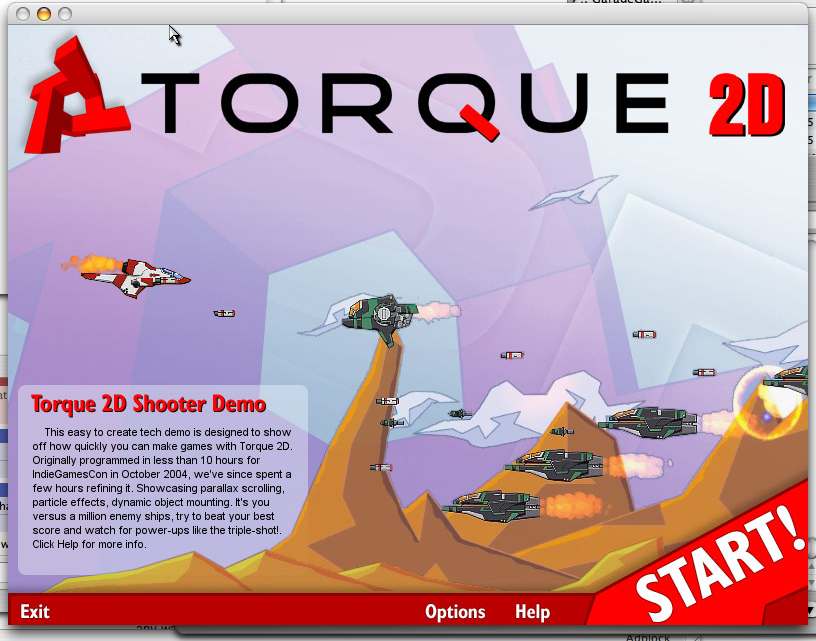 So apparently if you make it through the 20 page .pdf tutorial that comes
with the engine, you end up with something more robust than I wrote, so I
take this to mean that yes, T2D probably is a good prototyping
environment.